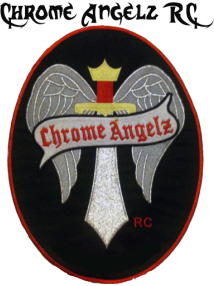 1.   Name: Chrome Angelz RC
a.    Chapter name will be on the bottom of the patch.
b.   Logo merchandise will be purchased through the organization.
c.    The patch will be placed in the middle of the back and a patch agreement will be signed.
d.   Logo trademark 2012.
2.   Purpose:
a.    To promote unity and a positive image of women riders.
b.   No drama.
3.   Membership:
a.   CARC dues are $10.00 per member, collected by the chapter president. Chapter president in turn, will forward dues to CARC. CARC dues are to be submitted by August 1st or when a member is patched in.
b.  Chapter membership will consist of about 12 members per chapter. If anyone else wants to join after that, we will encourage them to become a sister chapter.
c.   Chapter membership dues are to be decided upon by the members of each chapter when chapter bylaws are being established.
d.    Chapter membership dues will occur annually in the anniversary month in which your chapter was founded.
e.   New members must serve a six (6) month probationary period. Majority vote carries in voting in new probates.  New members must attend four (4) meetings as well as three (3) rides or social events.
f.    To retain membership, members must attend six (6) meetings and six (6) events each year.
4.   Officers:
a.    President – Presides over the meeting
b.   Vice President – Assists the president
c.    Secretary – Takes minutes of the meetings, maintains documents and keeps a membership database
d.   Treasurer – Keeps an itemized account of funds and collects chapter dues
e.    Sergeant at Arms – Keeps meetings running smoothly
***Elections for officers occur every two (2) years***
5.   Chapter bylaws to be written and agreed upon by members. Final draft to be sent to the organization.
International women's motorcycle riding club, Chrome Angelz RC Inc, New Jersey